The Amazon Threat to the Financial Services Industry

FinTech startups were once considered banks' most troublesome foes. Agile, innovative, and capitalizing on consumer distrust for traditional financial services in the wake of The Great Recession, FinTech innovators emerged by the dozen, armed with exciting and consumer-friendly tech that promised to improve customer experience and change the way people manage their money.

The banks, for the most part, responded and survived. They invested in their own technology - such as online banking and mobile apps - to compete with these startups, and have gradually won back the trust of their customers. But the landscape is always changing.

Today, there's an even bigger threat to banks coming from a different direction - tech firms. Giants like Facebook, Google, Apple, and Amazon - undoubtedly the most feared company in America - have the power and potential to seriously disrupt the banking sector, and bank executives around the globe are becoming increasingly concerned and obsessed with the threats they pose.

Bank Executives Are Talking About Amazon More than Ever

The growing preoccupation with technology firms is seen in the rising number of mentions of the Big Four during bank executive's earnings calls with analysts. According to data compiled by Sentieo, Amazon was mentioned more than 170 times in the past year during financial industry conference calls - nearly triple the 2016 figure. 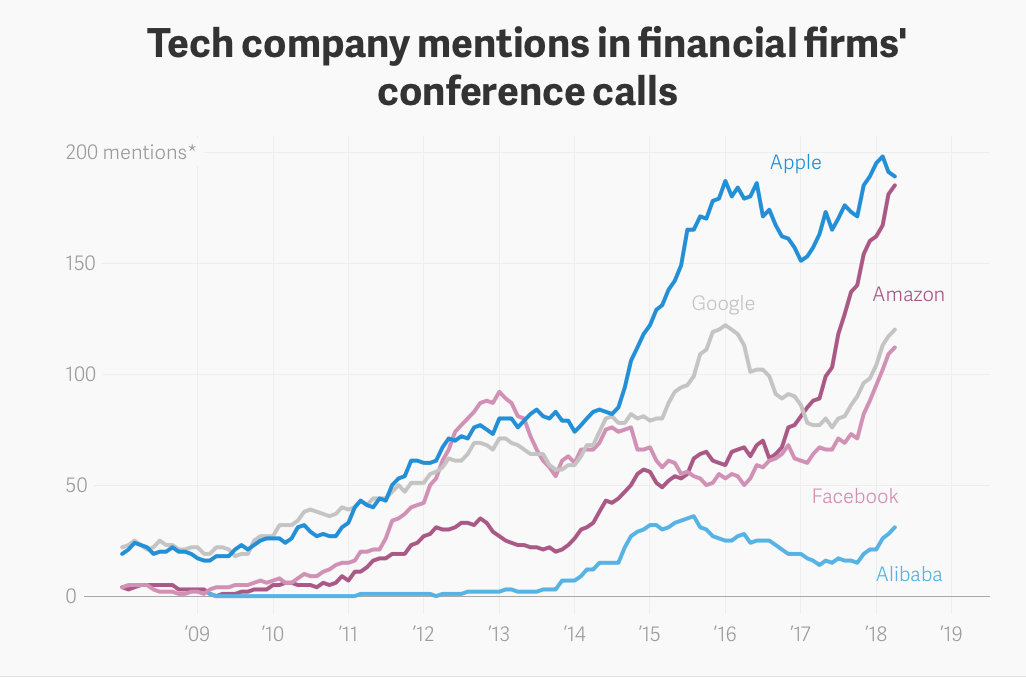 Greg Braca, Group Head for US Retail at Canada's TD Bank, made it clear in a call on March 27 that it is now these big tech firms that pose the greatest threat to the financial services establishment: "If the regulatory environment continues to come down, and you were to see one of these very large, very liquid entrants of the Amazons or Facebooks or someone like that - that could be a game-changer. But I'm less worried about the FinTechs in an absolute sense than maybe [if] we would have talked about it a year or two ago."

At present, Amazon is creeping slowly into the financial services space by expanding its service offers in ways that make sense for customers. We now have Amazon Cash, for instance, which allows people to add money to their Amazon Balance at participating convenience, drug, or grocery stores (over 30,000 of them). Then there's Amazon Pay, a digital wallet similar to PayPal, which enables users to pay for goods from vendors other than Amazon. The company also provides loans to small and medium-sized businesses and is planning to offer a credit card, co-branded with JPMorgan Chase & Co.

And there's more to come. In March, reports emerged that Amazon was in talks with big banks - including Chase and Capital One - about creating a product similar to a checking account for its millions of customers to use. It's believed that the product will be aimed primarily (though not exclusively) at the younger generation - those aged between 18 and 24 - who currently have few or no debit or credit cards in their wallets.

The move would make it easy for Amazon customers to pay for products right from their Amazon bank account, potentially locking these young consumers in as Amazon customers for life. It would also allow Amazon to avoid millions of dollars in transaction fees paid to credit card companies, and of course, collect more information about the financial positions and purchasing behaviors of its customers.

For Tim Barefield, Managing Director at the consulting firm Kotter International, targeting young people with a convenient and accessible banking product puts Amazon in a smart position for the future. "The sooner you can start collecting information on them, the better prepared you are," he said. "For Amazon, it's another way to expand their brand. Their brand is reaching out every place that their tentacles can reach out to."

Young People Are Ready to Bank with Amazon

A checking account from Amazon could improve on the banking experience for younger consumers currently offered by existing players. Children under 18 aren't usually able to sign up for a bank account without parental consent, and checking accounts for high school students often come with service charges and high overdraft fees.

Stuart Sopp, CEO of Current - a startup that offers debit cards to teenagers - says that Amazon is in a prime position to exploit this gap in the market. "I'm sure Amazon is scaring the hell out of every single regional bank and credit union right now," said Sopp. "The banks have very clearly not serviced these demographics, so there's opportunity."

A survey from Cornerstone Advisors confirms that the idea of an Amazon bank account appeals to millennials. In all, 83% said that they would be open to banking with Amazon - even if it meant having to pay a monthly fee of between $5 and $10. 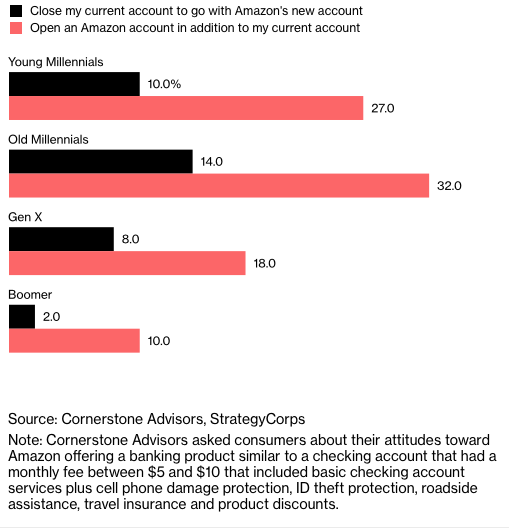 Bain & Company estimates that a banking service from Amazon could swell to more than 70 million US customer accounts within five years, equaling the size of Wells Fargo, the country's third largest bank. The 70 million figure assumes that Amazon forges a financial relationship with half of its customer base - a recent global survey from Bain indicated roughly 50% of people expect to buy a financial product from a major technology company over the next five years.

"Once Amazon has established a cobranded basic banking service," said Bain, "we expect the company to move steadily but surely into other financial products, including lending (both purchase financing and debt consolidation), mortgages, property and casualty insurance, wealth management (starting with a simple money market fund to hold larger balances), and term life insurance."

Amazon has all the tools it needs to succeed in banking - a huge customer base, digital prowess, and an organization that's skilled in and committed to improving customer experience and service.

While just a couple of years ago FinTech startups were pegged as the most likely disruptors, it's now clear that it is in fact established and already-trusted tech firms that pose the biggest threat. Customers - particularly those aged 34 and under - are indicating that they are ready to bank with a technology firm, and it seems Amazon will be first to make a serious move into this market, ahead of Google, Facebook, and Apple.

"For bank executives and board members, this is a watershed moment," says Bain. "Amazon's entry takes the competition into a different league. Consumers' expectations keep rising as people grow accustomed to simple, convenient digital channels perfected by digital natives such as Amazon. If banks don't reorient their approach and radically accelerate their rate of progress, they will watch technology firms steadily poach their business. At first, it will be the unprofitable slice that no one wants. Then the rest of the pie."

The threats big tech companies pose to banking are set to be hot topics at Future Branches 2018, taking place this December at the Hilton Austin, Austin, TX.