It's the same story the world over - bank branches are closing at an alarming rate. In the UK, this rate has now accelerated to 60 a month. Over the past three years, nearly 3,000 branches have either been culled or are earmarked for closure by the end of 2018.

As more and more customers now prefer to bank online and/or on mobile, traditional high street branches are becoming less and less relevant. Lloyds - Britain's biggest retail bank - for example, reports that in the last four years, the number of simple transactions completed in its branches has fallen from 53% to 28%. As such, the bank has been swinging the axe at its own branch network, cutting around one-third of all its branches since 2011.

However, amidst all the closures, Lloyds is also going against the grain, having just spent several million pounds opening a huge new Halifax (part of the Lloyds Banking Group) branch near Oxford Street in central London - and it's a far cry from the traditional image of a British bank.

The flagship store - which officially opened its doors on June 8th 2018 - is the biggest branch in the UK, offers 13,500 square feet of customer space over three floors, employs 50 staff, is open seven days a week, and is specifically designed to appeal to customers of all ages.

For children, there are iPads loaded with films and cartoons, and plastic elephants to sit on and play with. But the real innovation comes in the "Kids' Savings Zone", designed to teach children good saving habits. The zone features animated "piggy adventures", where a piggy bank is shown blasting off into space. A particularly nifty feature is the "feed the pig" coin-sorting machine, where children (and adults too) can pay in loose change directly to their Halifax account. 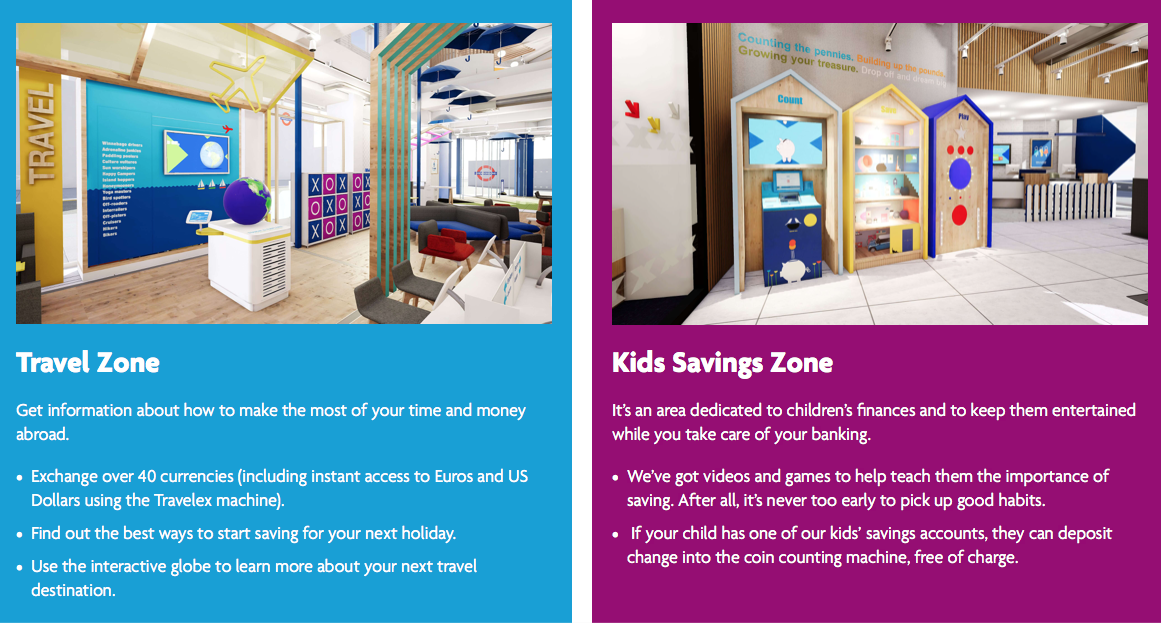 Then there's the "Travel Zone", featuring an interactive globe which offers holiday ideas, tips on managing your money while abroad, and advice on financing a new trip. On the first floor, a huge coffee shop serves "barista crafted" coffee in a relaxing space where Halifax customers and non-customers alike can come to unwind, chat, or work. The cafe is run by Change Please - an enterprise backed by Lloyds that helps homeless people get back into employment.

"Branches are important to us," said Managing Director of Halifax, Russell Galley. "Nearly 1.5 million customers come through our branches every week. We think 'multichannel' is the future, rather than just digital. This branch reinforces our brand in a busy location and offers a warm, friendly environment."

On the ground floor, a safe deposit box facility uses biometric fingerprint technology to allow customers to store their possessions in a safe and secure location. The boxes can be accessed seven days a week when the branch is open.

There is also a large "DIY Banking" section, where customers can use machines to make deposits, withdrawals, and pay bills. If they need help with anything, phone booths and wall-mounted tablets are available to contact telephone and online banking for technical assistance. 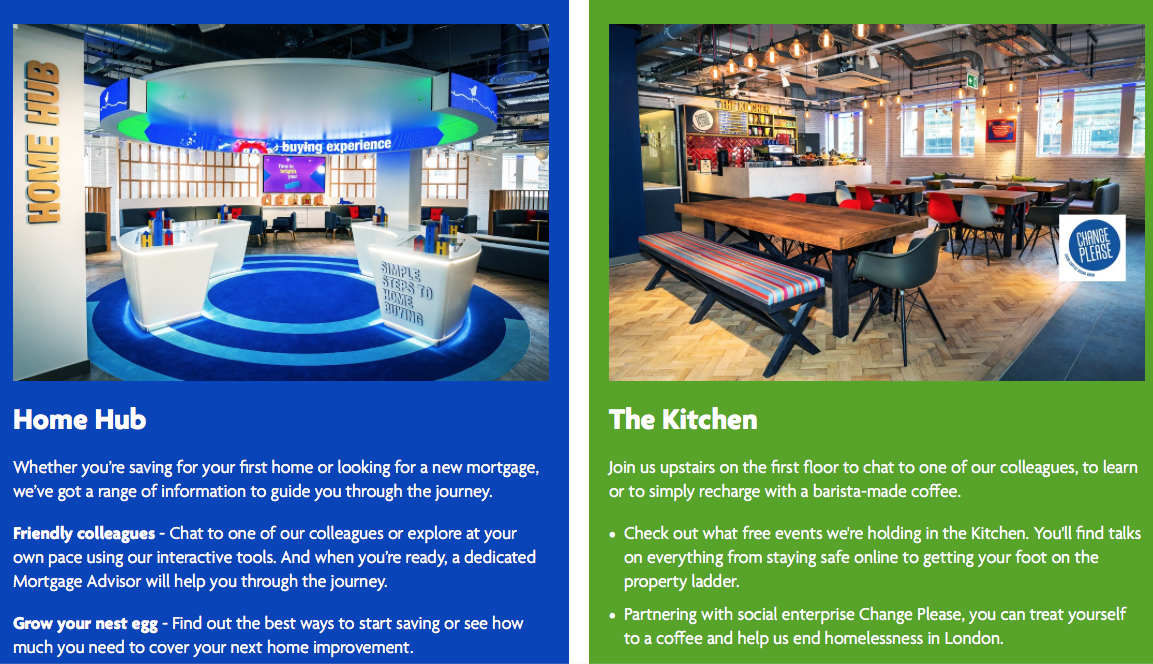 At the heart of the branch is the "Home Hub", which helps customers with all aspects of the home buying and moving process. Here, dedicated Mortgage Advisors are on-hand - available without an appointment - to guide customers along the journey. Putting this zone center-stage fits with the bank's dominant position in the UK mortgage market. It also speaks of the new branch's core purpose - to nurture face-to-face customer relationships as people come in to discuss more complex financial matters like buying a home.

"Banking is often quick and transactional, but we know that some financial decisions need more thought and that's why branches remain vitally important," said Galley. "Support and guidance from our colleagues is still key for the big or unexpected moments in our customers' lives, such as home buying, having children, divorce or bereavement."

The branch also hosts free events, such as coding lessons provided by Google and Microsoft for 8-13-year-olds, cybersecurity talks by the police, and first-time homebuyer forums.

Recognizing the Value of Human Interaction

The new branch is the second flagship Lloyds has opened in less than a year. The first was in the city of Manchester in September 2017 - and there could be more to follow, depending on how well these first two perform. At the opening of the Halifax branch in London, Antonio Horta-Osorio, Lloyds' Executive Director and Group Chief Executive, said that the aim of the new "megastore", as he called it, was both to boost the "brand presence" of Halifax in one of the capital's busiest places, and to offer practical improvements on the branch experience.

It certainly does that. However, at a time when banks - including Lloyds - are being forced to throw down the shutters on thousands of branches around the world every year, it remains to be seen whether reimagined high-tech branches like this will be enough to keep customers coming through the door.

For Robin Bulloch, Lloyds Bank and Bank of Scotland Managing Director, the branch isn't dead - it just needs reinventing, which is precisely what Lloyds is trying to do. "Customers' needs are changing and it is vital that our branches reflect this," he said at the launch of the Manchester flagship. "While digital services are becoming increasingly important to our customers, we continue to recognize the significant value of human interaction - people want to deal with people when it matters. That is why branches are not a thing of the past - they just need to be reimagined."

Branch strategies are set to be a hot topic at Future Branches 2018, taking place this December at the Hilton Austin, Austin, TX.