How Regions Bank Is Redesigning Its Brick and Mortar Branches

With so much of the financial industry being taken online these days, it's easy to think that the days of brick and mortar banking sector are numbered. However, Regions Bank isn't ready to give up yet with its bold new branch design.

The Region Financial Corporation was founded in 1971 after three Alabama-based banks merged into First Alabama Bancshares. The banks continued to operate independently until revised regulations forced a formal merger in 1985. The bank continued to expand across the South East of the United States, opening locations in Florida, Georgia, Tennessee, and Arkansas. In 1994, the company changed its name to Regions Financial Corporation to reflect its growth.

Today, Regions is one of the biggest regional financial institutions in America, employing over 22,000 people. The company has revenues of $5,967 million, placing it at #436 on the Fortune 500.

Due to the proliferation of online banking, brick and mortar branches have had to innovate in order to attract customers back through their doors. A focus on innovative technology and exceptional customer experiences has had to be established alongside the usual services one would expect at a branch.

"When you think about the bank branch, it really goes back, at a minimum, decades and in some cases probably generations the way that branches look in the United States," said Scott Peters, Head of Consumer Services for Regions, in an interview last year. "Banking really needed to evolve to provide that sort of on-demand, constant availability for everything we do." 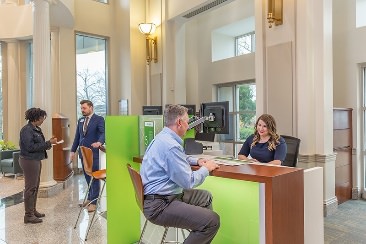 It is with this shifting customer profile in mind that Regions Bank has set about overhauling the design of its branches. In the new locations, gone is the traditional roped-off line which leads customers to teller windows. In its place are stations staffed by bankers versed in a wide knowledge of the bank's products and services. Now, instead of having to visit the teller to make a deposit or book an appointment to speak to a manager about a loan or credit card, customers can sit down at a friendly open desk and discuss almost all their needs with a single staff member.

Customers also no longer have to wait in line as a staff member will greet them as they enter the branch and take them to their desk to have a conversation about their needs.

Another great innovation being installed in the new branches is video banking ATMs, which are available in the lobbies, as well as in the drive-through banking locations.

The Video ATMs serve all the usual functions of an ATM, but with the added feature of being able to speak to a bank representative directly via video conferencing technology. The tellers manning the video ATM service are available outside of usual bank opening hours (from 0700-1600 on weekdays, 0800-1700 on Saturdays, and 1100-1700 on Sundays and holidays) extending the availability of Region Bank's brick and mortar banking services for its customers.

Regions' Video Bankers can speak directly to customers about their banking needs, process most teller transactions, and help with account maintenance and general enquiries. And should any questions or issues arise from an ATM transaction, there is always a specialist at the ready in the branch to provide assistance.

Two brand new Regions branches opened in the Atlanta metro in March this year, offering customers the very latest in advanced features and services, including the video banking ATMs, as well as DepositSmart ATMs (which accept deposits and cash checks at time of day or night), and facial recognition and fingerprint technology for safe deposit box users.

With its reimagined branches, Regions Bank is ensuring it gives customers a reason to get off their smartphones and start visiting brick and mortar banking locations once more.

"From online and mobile banking to our branch personnel and new ATM technologies, we are focused on providing greater convenience and value to the people and businesses we serve."

The future of brick and mortar banking is set to be a hot topic at Future Branches 2018 this December in Austin, Texas.